A downloadable game for Windows

This was made for Terminal Jam Reboot, Apr/May 2020!

I worked on this for the weekend of 25th & 26th April, and a few days I had off of work the following week (planned for something before lockdown happened, but happily coincided with the jam) from 29th April to 3rd May. The first few days were spent getting the basics of a roguelike into the game, and a bit of learning libtcod and also learning Python. I worked on it for a while each day, but tried not to work too much at once so as not to burn out (the luxury of the jam being two weeks long instead of two days).

In terms of gameplay, there is not much there. I would have loved for the raytracing stuff to have worked better sooner and be able to add more interesting things to make it actually fun. One thing I considered was having it be more real-time-ish where the player can move constantly (so more like Wolfenstein3D/Doom), and I was considering having it so that time only moved when the player moved or attacked (sort of like Super Hot, although my inspiration for that was more from Shattered Pixel Dungeon's time mechanic on Android).

So as I mentioned the raytracing didn't really work out. The basic stuff for rendering walls, floor, ceiling was easy enough (all thanks to javidx9, as I mention in the "start of the jam"), and I added texture mapping for the walls which wasn't *too* hard. But getting it to render entities right took several days, and as you can see if you tried it it still doesn't really work very well. It went through phases of not looking right at all, looking mostly good but a bit off, then in trying to fix that it goes back to being not right at all again. It's been fun trying to figure it out by myself, but oh boy is it annoying I didn't manage to do it. Maybe next time.

The sprites for the wall, orc, troll and potion are all CC0 from Dungeon Crawl 32x32 tiles on OpenGameArt. Looks like a really nice set of sprites, I would love to use more of them in future.

After the jam, I would love to add more to make it an actual game rather than just a kind of 'demo' game. I'll either make a new Itch project page for a continued version, or just keep the original end-of-jam zip here for posterity and use the same page.

I recently saw a video by javidx9 on YouTube about writing a classic Wolfenstein 3D style raycasting renderer in a Windows console, and thought it looked really cool. Then I saw the Terminal Jam Reboot coming up in itch.io's jams, and thought it was a great opportunity to try it out!

I was going to do it in C++, but the documentation for working with libtcod in C++ is old and dreadful. So it looks like I'm going to be learning Python as well! Good thing this jam is two weeks long...

GitHub - There is a README.md file which includes instructions for running the code.

Windows zip - Run 'engine.exe'. Controls can be found on the GitHub page. 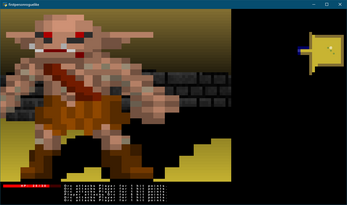